It's crazy how quickly time can fly when you're having fun. I left Ireland at the very start of February and it's already May. The past week has been another of glorious sunshine here in Texas which one of many reasons I want to spend lots more time here. One of the musical highlights of the past week has been photographing the Railroad Revival Tour. Basically a group of indie-folk-country bands traveling on a train from California to New Orleans, so I got to shoot them playing beside train tracks here in Austin. I love seeing performers love what they are doing and nobody epitomized that more than Edward Sharpe and the Magnetic Zeros. 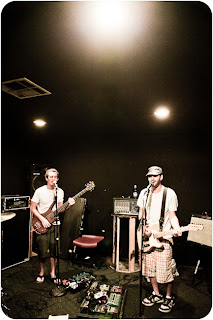 I also got to spend a little time with Austin locals, Tin Can Phone in the rehearsal space. It's a bit of a giant warehouse space separated into a huge number of rooms so much like many music practice places around the world, slightly lacking in a lot of atmosphere.
I also did a good touristy thing for the first time in ages. Myself and Lindsey, went off on a trip around Austin on a sunny afternoon, on segways. The last time I was on a segway tour I was in Madrid. The Austin tour was slightly more safety conscious but still had the weirdness of buzzing along the street on two wheels with virtually no effort at all. We then went to eat at a brand new modern french/american ranch food restaurant, Contigo, which hasn't even had its opening night yet. Most of the tables being outside is a joy compared to eating back home in Dublin as here in Texas you can sit in the warmth of the evening sun in shorts and a t-shirt and eat food like rabbit and dumplings, ox-tongue sliders, quail legs, deep fried green beans, potato and pig ears.
In a few short days the traveling begins again when I head off to the New Orleans Jazz and Heritage festival, should be a fun experience and I get the pleasure of overnight bus journeys once again...