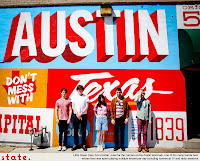 Once upon a time, I arrived in Austin to attend what I thought was just another music festival. That was two years ago and I’m still here having never left. This is the story of why SxSW is an almost indescribable event and why Austin is such a unique and enticing city.


Texas is famous for barbecue, Republicans, country music, cowboys and since 1987, for South by South West. Nearly everyone has been to some sort of music festival at some point in their lives, but until they’ve been to Austin it’s nigh on impossible to explain what SxSW is like as an experience. It’s located in one of the hottest parts of central Texas, the state capital, home to a slightly smaller population that Dublin but also the place that on an average night in the year has over 100 live music venues, enabling its self titled, live music capital of the world tag. But when SxSW hits town, the number of places to play dramatically increases and the number of acts appearing year now stands at over 2500. Add to that a massive international film festival plus a huge interactive media and gaming conference and the sheer number of creative people coming to the town is overwhelming. 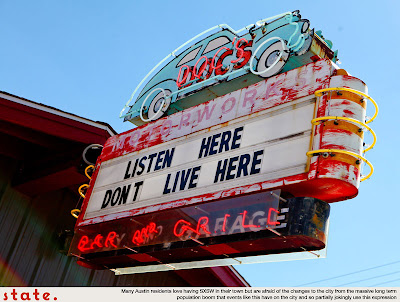 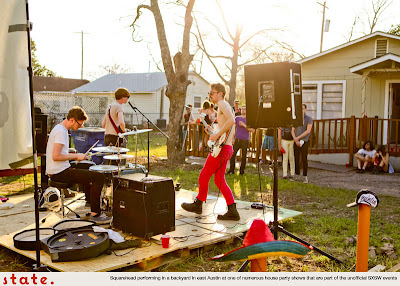 SxSW isn’t too picky when it comes to the kind of music they showcase here. Snoop Dog came to launch his Snoop Lion Reincarnation film and also to perform on 6th Street like everybody else. Prince played to just over 1000 fans who won tickets online, Justin Timberlake appeared at the MySpace showcase whilst Green Day played for the ACL TV show cameras at a more conventional venue. Vampire Weekend debuted new material in a packed convention ballroom. Nick Cave, Yeah Yeah Yeahs and Dave Grohl’s Sound City Players all popped up at the back of a barbecue restaurant. Out on the banks of the Colorado River, in the city centre public park Auditorium Shores, The Flaming Lips headlined a show for everyone without a wristband or badge, filled with local music fans and families out to soak up the atmosphere of the festival. 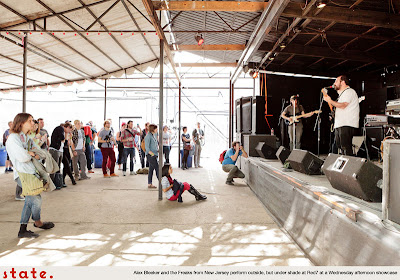 Wristbands only, wristbands and badges, RSVP, lines, queues; some of the more infuriating aspects of what happens when a festival gets so big. Queuing in the Texas sun is almost guaranteed at some point during one’s time here. People with badges (a ticket with your face on, that you hang around your neck) normally get priority entrance to a show. If you have the wristband that you can buy as a music fan or an artist wristband, you’re normally second on the list of who gets in. Then there’s the free line. You don’t need to spend any money but may spend the whole time in one of the numerous queues that snake around blocks throughout the city centre.

There’s also is the mysterious world of RSVPing. Many shows are run by companies like Myspace, The Hype Machine or the legendary Fader event and in order to get into these you have to give them your details online in advance and you may get picked out as a ‘winner’ of a ticket. Companies such as RSVPster have even sprung up who will reply to all these parties and shows to try and get your name on the list. The best thing is, if you get tired of standing in line to see the next big thing, you can often simply go to the venue next door and get in and discover some other new artist. 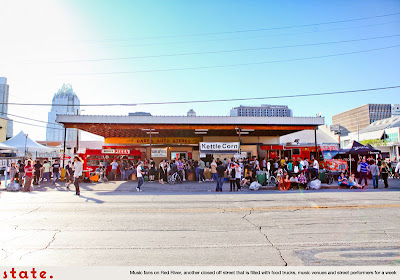 Austinites, the people that make up this city the rest of the year, have become a little jaded at so many bands playing in their town at shows they can’t get into so an ever growing number of unofficial local events take place in the leafy neighborhoods around Austin – particularly on the increasingly gentrified East Side, where backyards become the places to congregate, drink cans of Lone Star and watch as stages spring up letting the sounds of bands waft like barbecue smoke around the urban neighborhoods. Traffic, already a bugbear for the locals here, gets to infuriating levels during South-by, leading many people to pack up and leave for a week, renting out their apartments to folk from all over the world who are trying to find somewhere central and affordable for a week to rest their weary feet at the end of long days of free beer and loud music. 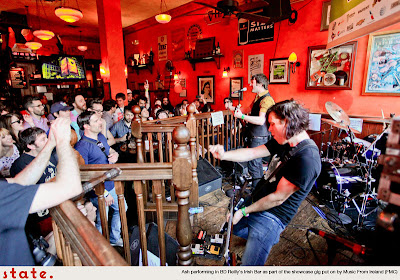 So whilst the music industry may be collapsing around us, Austin and SxSW is a beacon of hope owing to the fact that thousands of bands, play hundreds of venues and people come to see and listen to them, write about them, share their music, go to their shows and book them for tours. This relatively small city produces some magic and lets the world see that the music industry isn’t going anywhere; it’s changing, it’s growing in new directions, new and old music is flourishing. This year’s keynote speaker in the immense, Austin Convention centre was Dave Grohl. “Now, more than ever”, he cried, “independence as a musician has been blessed by the advance of technology, making it easier for any inspired young musician to start their own band, write their own song, record their own record, book their own shows, write and publish their own fanzine, although now I believe you call it a blog? Now more than ever, you can do this, it can be all yours. And left to your own devices, you can find your voice” 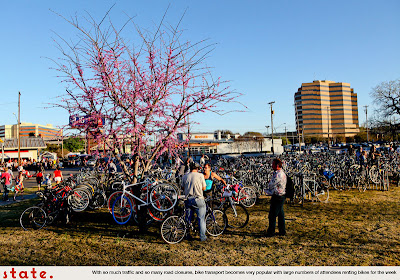 Austin and SXSW is an event and a place, unlike any other; come here, experience hearing twenty concerts in your ears, coming from twenty venues at one time. Come discover some new music, eat deep fried beetroots or bacon jam fries, try some fatty brisket. Go see Prince or Depeche Mode or Nick Cave for free if you want. But be warned, you may end up falling in love with this place and end up never leaving. 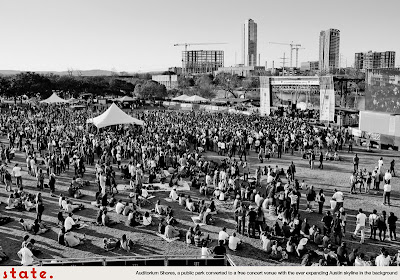