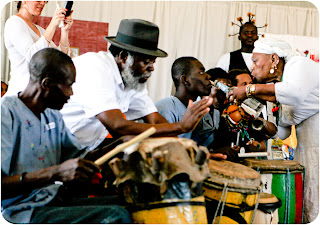 It's just over 500 miles from Austin to New Orleans but the change in culture between the two cities is pretty marked. New Orleans with all it's french/haitian/cajun and completely distinct architecture is a beautiful place. I arrive at my hostel at 7:30am in the morning before anybody is even at the reception. So after making some pancakes in their kitchen and drinking some coffee, I check in and then head off to Camp Street to pick up my tickets and then to Canal Street to catch the overpriced bus to the Fairgrounds Racecourse where the giant music festival is taking place. It's a huge event, around 15 stages of music, numerous tents filled with culture like the Haitian area and the Native American area. 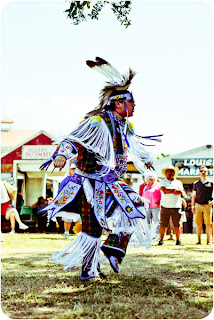 And obviously then there is the music; 15 or so stages filled with local bluegrass bands to the likes of Arcade Fire, the main headline band on the Friday evening. I spend two days there, taking photos, wandering around in the baking sun, watching gospel music, rock, country, folk and everything in between. Wasn't brave enough to try lots of the strange foods on offer like gator pie, but had some of the best festival food I've ever eaten. Jambalaya, fried bread and strawberry lemonade being some of the highlights. After the first days music I went back to the hostel pretty early due to lack of sleep on the bus the previous night. The second day of the festival was again, filled with perfect weather and lots of great food and music. Halfway through the day I noticed my main camera lens was acting strangely and on investigating I discovered it's broken to a point that it needs to be sent back to Canon for repair. Not really what I wanted especially as it won't be back in time for my trip to Iceland and then subsequent wedding that I'm shooting in Dublin. So an expensive day out at a festival. Still I managed to use it enough to get a few decent photos of Arcade Fire the headline band.

The second evening, I went for a walk into the French quarter and the infamous Bourbon Street. I can only describe it as a horrendous mix between the worst elements of temple bar on a Saturday night and Amsterdams red light district. My hostel http://www.bourbon.aaeworldhotels.com/ was a 30 minute walk through the beautiful garden district. It was strange to be back amongst travelers form all over the world. I met two French guys, two Danish guys, one of whom spent a night in a New Orleans prison cell. There was a girl from Galway and another traveler from London. I think my few days in Louisiana have emphasized how much I like spending time with people who are from the place I'm visiting. Whilst it's great meeting people from all over the world and hearing their traveling stories, I think one only gets a real sense of a country by spending time with the people who live there. 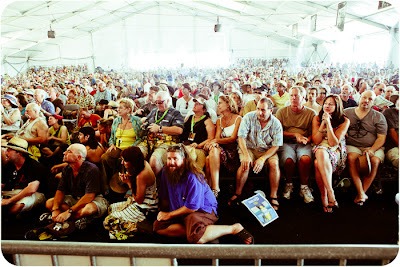 On my third day in New Orleans however, I spent the day as a tourist, wandering through the town, from the Garden district where I was staying, on the streetcars, up to the french quarter and all the amazing architecture. Most of the area is packed with tourists, overpriced cafes, superb ice-cream shops, street performers, beautiful balcony gardens and views of the amazing Mississippi river. It was this river that caused all the trouble of flooding during hurricane Katrina and as I write this the river is flooding again from Memphis down to New Orleans. 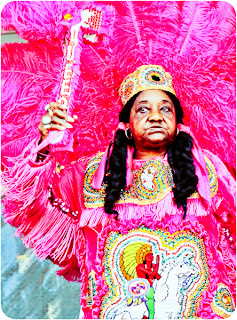 Unfortunately, due to the unusual system of press passes that were issued for the music festival I couldn't go again on the Saturday and Sunday so instead of hanging around in tourist mode, I'd grab the overnight bus back to Austin for my last few days in the US before heading to Iceland. It's amazing how poor the American bus service is. At first I was told that there was no more seats on the bus and I couldn't travel, despite being clearly able to see empty seats on the bus that people had just piled their bags onto. 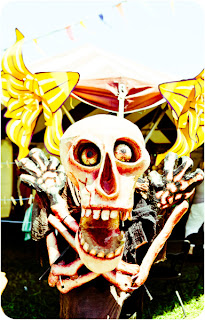 Then at the first stop, we all had to get off the bus, hang around inside the waiting area for 15 minutes before being allowed back on by the angry bus driver woman. It was an overnight bus, but unlike the superb buses in South America, this one had very little legroom and the seats didn't go back, and the air-con was on 'cold blow cold air all night' mode 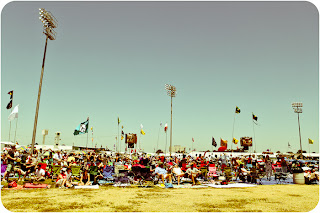 So now I'm back in Austin, for a few more days before flying from here to Chicago, from there to Newark airport and from there to Reykjavik in Iceland. Spending the next few days, editing up photos and videos from the past three months and of course, swimming in more rivers and finally going to a big classic barbeque pit restaurant. Photos of giant slabs of fatty meat coming soon....