I took a trip to madrid for some much needed rest and relaxation and discovered a great band in a little club on a Monday night. His Majesty the King. 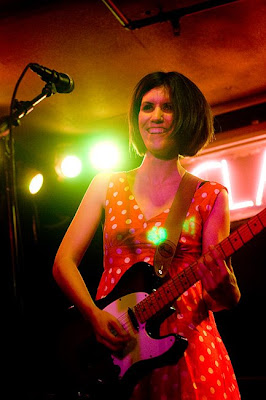 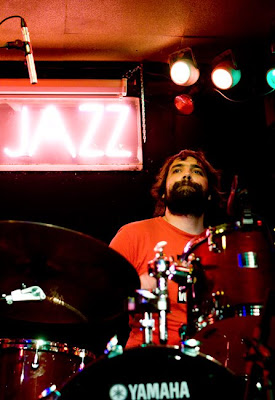 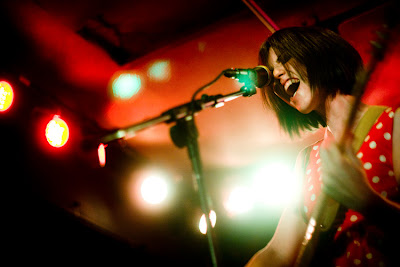 
At half past nine in the evening, in the north of central Madrid a packed old jazz club is full of Spanish music fans waiting for the first band of their evening to hit the stage. It's still over 25ºC outside and it seems even hotter waiting for 'His Majesty the King' to hit the stage.

Clara (singer and guitar) and Nacho (drums), have only been playing together officially as a two piece band for 4 months but on stage they have great chemistry and a set of songs that will surely land them with comparisons to the Yeah Yeah Yeahs and the White Stripes. Clara "had a couple of bands in secondary school but this whole 'His Majesty the King' thing started about ten months ago with me making my mind up about music, taking it more seriously and recording my first songs. I was on my own then, and I used to play with my acoustic guitar- I always wanted to play electric, though. My first gig last January. Nacho, who I had known for almost four years was there and after the gig he asked me If I would like to give it a try, playing with drums and bass. It didn't really work out for me, as I wasn't sure of being in a band but some months later, I called him back, asked if he'd be up for a second chance, just drums and guitar... And that was it. I did the right thing! We're officially a band now!

His Majesty the King are one of a number of Spanish bands who sing entirely in English. Clara says: "I have listened to music sung in English my whole life, so I guess it comes pretty natural and I feel more confortable singing in English. As I heard once "Opera should be in Italian, and rock should be in English" It is not really the point, but if we ever play abroad, then I guess it's quite good we do sing in English.

Although they are on the starting rung of building up a following, the crowd loves them calls them back for a genuinely spontaneous encore for more of their catchy foot stomping songs.

If you don't want to make the trip to Madrid to catch them live, Clara tells State "we're about to record some new songs by the end of the summer, and we'll probably post them online, so people can download them. By now, we only have three songs on myspace, and I'm not sure whether they represent us the way we are now. But soon they'll be new songs! I think it would be really nice to play abroad, but the truth is we don't have any plans for playing outside by now. Want to bring us to Dublin?"

Listen to them at: http://www.myspace.com/majestyking